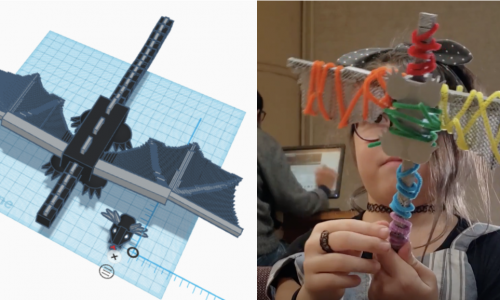 The design of my manipulative is based on the concept of multiplication and the “times table” representation. I have decided to work with these topics primarily because the focus student for my project is beginning to work with multiplication in her second grade classroom. She expressed in my interview with her that she finds the concept of multiplication difficult. Thus, the tool I designed, the Math Dragon, can not only bolster her introduction to mathematics, but also give my student an edge in learning her multiplication facts. My tool’s design is rooted in the Greek myth of the Hydra, a creature which, according to most legends, grew two heads back for every one head cut off. I discovered a relation to multiplication in this design, which my professor later also identified as a model of exponential growth. I could use the dragon to task my focus student with a problem like the following: “If the Math Dragon grows back two heads for every one head cut off, how many heads would it grow back altogether if four heads are cut off?”