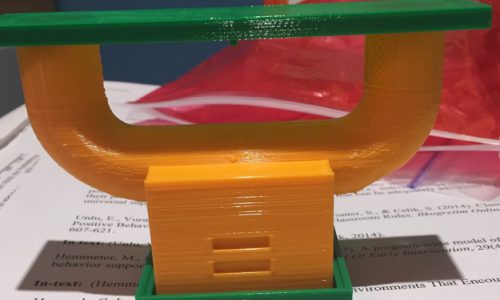 According to Walle, Lovin, Karp & Bay-Williams (2014), “Any time a concept is new, regardless of the ages of the students, manipulatives can help make the concept visual, concrete, and connected to other ideas students have learned” (pg. 24). Our manipulative will give young students a visual idea of what happens when you add or
subtract. Our manipulative will be even more effective, if the teacher provides meaning
to what the cubes mean. For example, instead of saying “there are three cubes”, the
teacher can say, “Imagine that these cubes are apples. Billy picks three apples from one side of the tree (puts 3 cubes in the left side of the pipe) and picks two apples from the other side of the tree (puts 2 cubes in the right side of the pipe). How many apples did Billy pick from the tree (lifts box to reveal 5 cubes in the tray)’. According to Walle et al. (2014), “Manipulatives alone have no inherent meaning. A person has to impose meaning on them. The manipulative is not the concept” (pg. 24).

In terms of learning, our addition/subtraction manipulative will be considered successful if the student understands that the combination (or separation) of balls yields a certain amount. Not only do we want the child to know simple addition and subtraction problems from memorization, but we want them to be able to understand that by physically combining two sets of objects, or separating them, you will either get more or less of those objects. The way our manipulative is set up, it allows for the answer to be hidden. For example, if a student were to put two balls in one side and two balls in the
other, they can guess the sum without seeing it. This will help provide us insight into how much the student understands about addition and subtraction.

As the child continues to use the manipulative, it is our goal for them to eventually be able to predict the outcome. If a student has never been exposed to any type of addition/subtraction problems before, it may take a few attempts to grasp the concept. However, after using the manipulative, the child should understand If after using the manipulative for more than one or two math lessons the child is not able to predict the outcome, for addition problems, we will know that it was unsuccessful. For example, let’s say a child is given multiple simple addition problems such as 1+2 =?, 4 +4 = ?, and 5+2 =?. After putting the objects into the manipulative they should get 3, 8, and 7, as end results. The child should eventually understand that prior to putting the objects down each tube, if they counted all of them together, they would get the same sum as they would when the objects go into the box. If the child does not grasp this concept, our manipulative has failed.

Our manipulative can work with both simple addition and subtraction problems, and simple addition word problems. To test our manipulative, simple joining word problems may work best. For a joining, or addition problem, we will have a starting quantity, a second (change) quantity, and the final result (Carpenter et al., 2015). An example of a problem would be, “Amber had 4 muffins. Her mom gave her 5 more muffins for snack. How many muffins did she then have?” The child will begin with 4 objects down one tube and add 5 objects down another tube, and she will get 9 objects altogether. In hopes that the child understands what the manipulative is representing, she will answer “9 muffins”.

When it comes to subtraction, word problems will not work. This is because the way our manipulative is set up, both the change and result will be unknown. Therefore, a word problem cannot be presented. The subtraction aspect of our manipulative does not allow for a child to “guess” the result. When the manipulative is turned upside down, a child begins with a larger quantity, say 10, and the objects will divide between the two tubes (we cannot predict how the objects will divide). When the manipulative is picked up, the child should know to begin with the first number (10), and look at the objects in the tray that came out of the left tube, let’s say 4. She will then say “10-4=..”, and look at the number of objects that came out of the right tube, which will be 6. Her end result will
be “10-4=6”. Understanding that a number can be separated into two different, smaller parts is the main idea.

Overall, the idea of our manipulative is to make sure our students have a full
grasp of what subtraction and addition means. Memorizing addition and subtraction facts
may be useful as they get older, but understanding why these problems make sense is
what will further help them in school.