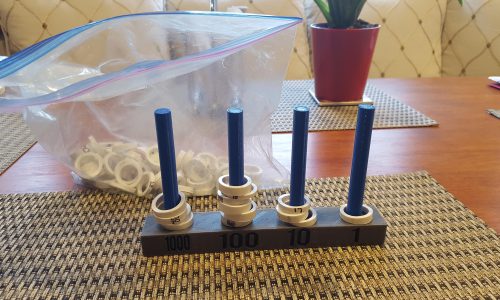 As I was thinking about what to do for this project, I looked back at the lessons that interested me. The lesson that stood out to me most was that of base-ten concepts. Growing up, I’d grown accustomed to using base-ten concepts to solve problems in addition, subtraction, multiplication, and division. When we were using the base-ten blocks to visualize how a young child would learn base ten concepts, it became clear to me that would be the direction my project would lean towards. I loved the idea of grouping based on each place (ones, tens, hundreds, etc.). In order to clearly demonstrate base-ten concepts, with unifix blocks, one can’t use more than 9 of each unit block. If there was a group of more than 13 ten sticks for example, it would have to be replaced by grouping 10 tens, getting rid of them, and replacing them with a 1 hundred square. The end result would be a 1 hundred square and 3 tens sticks to make 130. Hence, I came up with a base-ten calculator of four prongs for the base-ten places from one to a thousand, which for the rules of this model would only allow for 9 rings to fit in each prong. However, there will be 18 rings for each place value and each group of 18 rings has a color that corresponds to its place value.

When the user multiplies, she would ideally be adding the multiplicand x amount of times. When subtracting, the user might have to create more groups of 10 for a place value if that place value is being subtracted by a larger number. This is an active learning experience to see why addition, subtraction, and multiplication works in the way schools teach them. This design shows that base-ten concepts require grouping and adding or subtracting those groups of ten to place values depending on the problem. The way students learn how something works is if they do it hands on. This model is a hands on calculator for understand base-ten concepts. They would see for themselves why we borrow when subtracting and adding more tens when adding larger place value numbers.

If the manipulative that is created is successful, then this manipulative worked in aiding students in visualizing and learning the mathematical principles around base ten grouping.  One of the most important concepts of base ten to recognize is larger quantities are seen as units made up of smaller units. If successful this calculator allowed students to visually understand how units of tens are grouped together to make larger units such as hundreds, and thousands. The rings used would teach students’ relational understanding of place value through direct modeling representation. If students could demonstrate on this calculator how each ring not only means one, but simultaneously on a different rod mean one, ten, hundred, and thousand then they are demonstrating their learning around multiple ways to utilize grouping.  Not only understanding place value as a written or spoken concept, but also understanding that number symbols have various values depending where it’s placed numerically in a number sequence will be correctly demonstrated utilizing this tool. The students’ flexibility in thinking in multi digit numbers when it comes to grouping would be successfully supported in this test design that’s engineered to allow students to see the way grouping occurs in more complex numbers. If there is learning with this tool as observers we should see students independently utilize the tool to figure out an arrayment of problems of different complexities.

If the tool fails to work then we know as engineers the individual placeholders rings didn’t support relational thinking as we thought. The transferring of the rings from one rod to the next when solving problems could have been befuddling. We know the meaning of the rings as being associated with a unit that represents a measurable unit that is larger than the one single placeholder object was not understood. Unlike blocks that show direct modeling of individual ones, rows of tens, or hundred grids this calculator has the same individual ring that represents multiple units values. Base ten blocks that are singular like our rings still are stacked in rows of individual ones that make up rows of ten for the child to visually remember and be able to count out by ones the number as a whole. Our rings rely on the student understanding that each ring value is contingent on what labeled rod it is on. Another possible malfunction is the calculator can make the students confused if they lose their counting when transferring rings during addition, subtraction, and multiplication problems. With every new tool there are kinks to be fixed by testing the product and taking it from theory to actual implementation.

With each child having a complex mind with multiple ways of thinking, the way we plan to test our manipulative can show us how the tool is being used, where it aids in learning, and how it can be fixed in places it falls short of being productive. We plan to create a group of testing problems that analyzes how well our tool helps students with simple one digit problems, then two digit, three digit, and finally four digit modeling. We can do an arrangement of addition, subtraction, multiplication, and division to also see what types of problems the tool is best constructed for. After seeing the initial use of it with just written representation problems, we will test the tool against all the word problem choices we learned from our cognitively guided instruction problem types such as join result unknown, joint change unknown, separate result unknown, separate change unknown, part-part whole, whole part unknown, part part whole, part unknown, compare referent unknown, and compare difference unknown. Understanding strategies for these problems and learning how to understand our student’s thinking from leading them to reflect on their own strategies, we can see how the tool is used and if it might not be helpful for certain problems. During this testing we would take anecdotal notes on the child’s interaction with the tool as well as their thought process with working with the manipulative.

This tool would prove to be advantageous to older students who benefit from using modeling, but are often geared towards written representation strategies that make them more accustomed to regurgitating algorithm methods. As students advance in their learning they are often forced to give up strategies that helped them effectively answer mathematical equations beforehand, and are pushed to approach new problems with one method. This invention would give a more complex direct modeling tool that could be used during tackling advanced math problems. With multiple ways of thinking and learning, education doesn’t have to become uniform to one way of learning or solving problems, but can be opened to using newer technology that supports kinetic learners at any age. With the push to differentiating teaching and UDL classrooms, this tool can be used to create inclusivity in the classroom and support all learners that derive at answers differently.