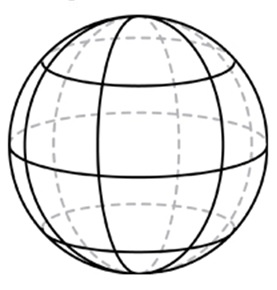 Next the student would be given only examples of two dimensional circles and three dimensional spheres.  Using a paper plate, a quarter, and clear bingo chip for the circle examples and a basketball, globe, marble, and an orange for the sphere examples the student would then sort the groups of spheres and circles.  I would then ask them why they sorted them the way that they did and what some differences are between the sphere and circle.  For example they could tell me a sphere can roll, has no corners or flat surfaces while a circle in flat.  Comparing a different 3d object to a sphere, such as, a cube I would ask what difference these two objects have.  Some of their answers may include that they cube can be stacked while the sphere cannot be but the sphere can roll and the a cube cannot.  Doing these three mini exercises will give the student as well as myself what properties the student knows already about three dimensional objects, specifically spheres.

Just having the child take a look around the room would be a good test for them to point out some two dimensional objects and some three dimensional objects they see around them.  Together we can take note of the curves, angles, and lines which create these objects.  Geometry is everywhere you look; all things are made up of angles, shapes, lines, line segments, and curves.

Building off the curves of the objects in the room I would introduce my sphere manipulative.  Having them draw a line segment on a dry erase board they could see the concept of a line segment; a straight line.  Next I would have them draw a line from one point to another of the sphere manipulative and tell me the difference between the line on the dry erase board and the line of the sphere; the line of the sphere is a curve.  A curve would be represented in the same manner; however, instead of being straight the portion between the two end points would be curved.

Through my sphere manipulative I would hope to achieve my goal of ‘whole-brain thinking’.  For most people one side of the brain is preferred but a connection between the two is best for whole-brain thinking.  When you think with your brain as one organ rather than pieces, geometry is at work because geometry is a subject where all parts of the mind have a job.  Boxed thinking is considered null in geometry but thoughts on a larger plane are necessary when doing geometry.  Bringing something like my sphere manipulative to teach geometry will bring more concrete concepts to geometry for those students who cannot grip on non-tangible concepts.

This material is based upon work supported by the National Science Foundation under Grant No. 1812887. Copyright © 2021.